Made With Monster Love

What’s in store for Cadence?

So what’s up with Cadence? Well, quite a lot actually. I’ve written a fair amount before about our unsuccessful Kickstarter earlier this year – so I won’t harp on that anymore than to say missing our goal was emotionally brutal, and the aftermath involved considerable introspection and soul-searching. As a natural consequence, we shied away from our responsibility to keep you guys informed of our progress. So let’s catch up with everything Cadence!

Straight after the Kickstarter went pear shaped – you might be aware of the Noodlestarter preorder campaign we set up. It was a good way to have a much needed laugh, and to give the most excited amongst you a chance to still throw some money at us (if you did, high five – you’re awesome). We were also hoping that we could maybe swing this into a small community helping us with feedback and some much needed motivation!

Well, communities are built on regular updates and meaningful interaction. In other words, you need a reason to keep coming back. As a one man programming team running low on energy, it was perhaps a bit optimistic of us to think we could keep this engagement up. It didn’t help that even the simple task of pushing updates out to beta members remains an unsolved problem.

So we decided to refocus our energy, and instead to set our sights on a Steam Early Access launch. We still have every intention of bringing Cadence to iOS, but by focusing on a single platform we get to take advantage of all of Steam’s built in infrastructure, like automatic updates and workshop integration. Also Steam is huge, there’s a better chance we’ll get a critical mass we need to make the game better for everyone.

On Stugan, and being a hermit in the woods

But, Steam is huge! There’s also a good chance Cadence will go completely unnoticed and slip into the void, which wouldn’t be great at all. It’s around this time that I was lucky enough to be a part of Stugan, a two month indie accelerator in the Swedish countryside. It’s safe to say that the experience was sublime, and Cadence is infinitely better for it.

I spent a lot of time reflecting on the lessons of the Kickstarter and Noodlestarter. Really trying to figure out the “magic” of Cadence, and perhaps more importantly, how to show people this magic. Much of our Kickstarter campaign talked about the ability to create your own music using the game. What I realised at Stugan is that, for people to really understand this, they needed to experience it for themselves. 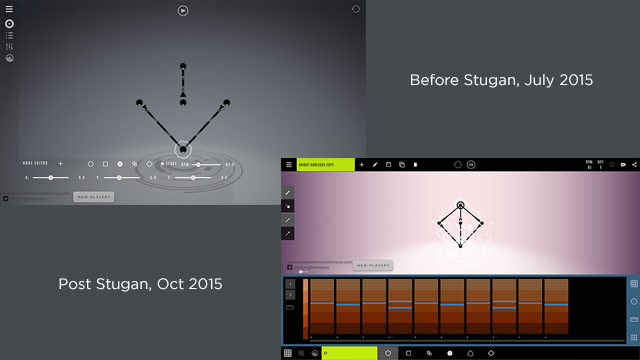 The Stugan effect, how the editor has been radically improved in the last few months

Stugan was an incredibly productive time, and I’m really proud of the fact that the editor in Cadence is unrecognisable from just a few months ago. It also feels like Cadence is finally finding its voice and becoming the thing I’ve been seeing in my head for 2 and half years now (is it still a game? I’ll leave that question for another day). Definitely watch the video below:

So when do we get to play Cadence?

The thing about Steam Early Access is that you only get one chance, and in order to stand out, the room for error is very low. I was desperately keen to get Cadence launched by the time I left Stugan in August, but it was clear this simply wasn’t humanly possible. And so August slipped into September, and then September slipped into October.

Of course these dates were more about how much money I didn’t have and the emotional release of finally getting the game in your hands. A more reasonable goal should have been based on how much work was still left to do on the game. This disconnect was burning me out pretty hard, and I’m glad that I’m getting much better at recognizing when I need to take a break. But what this means is that even though Cadence is almost, so very nearly there, unfortunately we’re not going to be able to get it out in time before the Christmas rush.

It’s well established that the holiday period is not a kind time for new indie games. They get drowned out by all the games with mega millions of marketing dollar to throw around. This means if we put aside our emotions that January or February is probably a much better time make a splash with our Early Access launch. On the upside this gives us time to really do our marketing right and give it the best shot. For our Noodlebackers keep an eye out over the next while, you’ll be getting your Steam keys early as our way of saying thanks for being there – and to help us iron out any Steam kinks and bugs we’ve missed.

If you’re in Joburg you can also try out Cadence at during its third rAge expo showing and take the new editor for a spin yourself.

Announcing the Cadence Noodlestarter: our delicious Plan BBuilding up Steam

© 2020 Made With Monster Love. Powered by WordPress